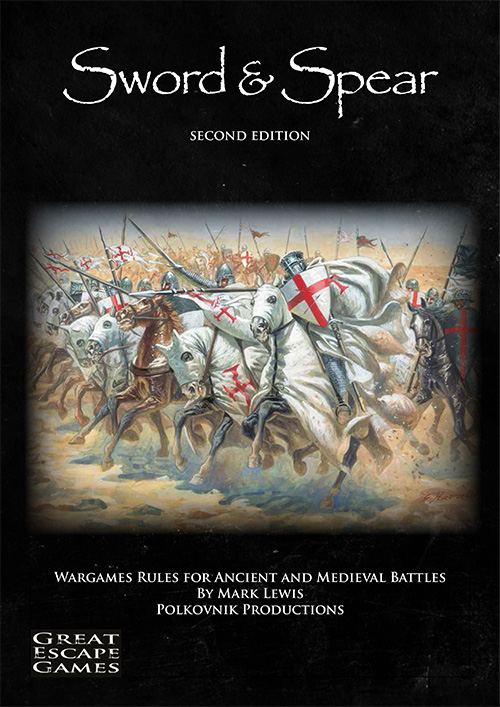 Sword & Spear is a set of wargames rules for large battles set in the Ancients & Medieval period. They are suitable for any scale figures and any basing standard. The only requirement is that figures are organised into units of equal frontage. A typical game consists of about 12 units on each side and games take around 2 – 3 hours. The rules are designed from a top-down perspective, focusing on outcomes rather than detail.

The rules feature a clever and innovative system for activating units that creates interesting and challenging decisions, keeps both players involved at all times and has a lot of depth and subtlety. Each turn is split into phases, where players each receive a number of command dice, which are rolled and then used to activate their units. The number shown on each dice determines which units it can activate (with better quality units being easier to activate), what the unit can do when activated, and the numbers also determine the activation sequence. Certain dice also give bonuses to combat, movement distance or shooting range. So there is a lot to think about, and allocating the command dice well is the key to success (although rolling lots of sixes helps as well !).

In each phase command dice are allocated, then units are activated in order. When a unit is activated it does everything – movement, shooting and melee combat. So there is no turn sequence to remember and work through. A unit cannot be activated more than once in a turn, and typically most, but not all, units can be activated in a turn (although this depends on the quality of the units involved, so a horde of poor quality troops will not have so many units activated each turn.)

Each unit has a type (for example cavalry), a discipline rating (depending on the quality of the unit) and a strength rating. The strength depends on the unit type (for example cavalry are strength 3) and determines both the number of dice rolled in combat and the number of hits required to rout the unit. Many units will also have some specific weapons or characteristics such as Bows, Armoured, Spearmen or Impact, although an average level of protection and offensive ability is assumed, so for example, a unit of cavalry may simply be: Cavalry D4 S3.

The rules are relatively straightforward, and there are no “to hit” tables, charts or lists of dice roll modifiers. They can be played using only the one sided playsheet with very little reference to the rulebook after the first couple of games. In fact we find we hardly ever even refer to the playsheet now.

Missile shooting and melee combat use the same mechanics, with both units (all combat is one unit vs one unit) rolling a number of dice, lining the dice up highest to lowest and comparing. Each lost dice roll may result in a hit, which represents a combination of actual casualties, cohesion and morale loss. Hits can be rallied, but when the number of hits equals the strength of a unit it is removed as routed.

The number of dice rolled by each in combat is equal to the strength of the unit, and may be modified upwards if the unit has impetus, and also according to a very short list of situations which give a unit extra combat dice (for example being uphill or having extra friendly units in contact with the enemy).

There is not as much rock-paper-scissors in these rules as in many other ancients / medieval games, but it does appear in the mechanic for impetus. If a unit involved in a combat has a command dice allocated to it this phase, it may have impetus in the combat and will gain one (or sometimes more) extra dice. There is a list of situations where the unit does not get impetus (for example cavalry vs elephants, mounted vs spears). This creates differences in the way certain troop types interact together, and gives them strengths and weaknesses other than their two basic stats. This is probably the most difficult part of the rules to remember, but all of the situations should be intuitive to experienced ancients & medieval gamers.

Each army has a number of leaders, which are important as units do not perform as well if they are out of command range and perform better with a general attached.

The rules are very much suited to multiplayer games. Many of our playtest games have involved two players on each side, with each player having a command of around 7 – 10 units.

The strengths of the game are that it gives an exciting, interesting and challenging experience, plays relatively quickly for the size of battle that is being depicted, and the rules are straightforward to learn, whilst having the depth to retain interest after repeated play.

Preview the book! More information is on the Polkovnik Productions website.

Weight for postage purposes is 110g. Full details of postage rates are available via the Customer Service page (see link at the bottom of this page).