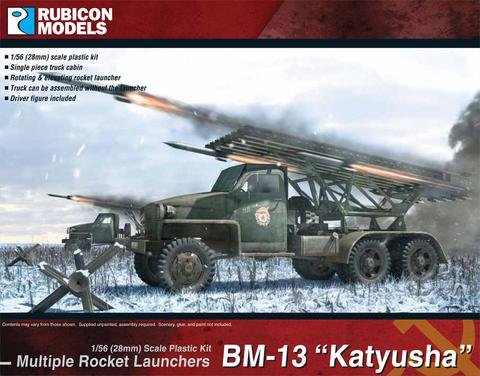 The BM series of multiple rocket launchers was employed by the Soviet Union in World War II.  They were known to the Soviet troops as “Katyusha” (the Soviet diminutive of ‘Katie’), because of the large ‘K’ that appeared on the rockets (which were manufactured at the Voronezh Komintern Factory). TheM-13 rocket was one of the most common types that was fielded.

Multiple rocket launchers were intended to saturate a large area with high explosive.  They could deliver a barrage more quickly than conventional artillery, but were less accurate and took longer to reload.  They were also relatively cheap and easy to produce.  However, they were vulnerable to counter-battery fire due to the large amount of smoke and dust generated when they were fired, which gave away their position.

The design was relatively simple, consisting of racks of parallel rails on which rockets were mounted, with a folding frame to raise the rails into launch position.  The M-13 rocket was 80cm (2ft 7in) long, 13.2cm (5.2in) in diameter and weighed 2 kg (93lb).  Katyushas were usually mounted on trucks.  Each truck had 14 to 48 launchers, depending on the size of the vehicle.

Katyushas mounted on trucks could be redeployed quickly after being fired, and thus avoid the inevitable counter-battery fire.  The Soviets tested several Lend-Lease truck types as the standard mount for the M-13 launcher, and chose the Studebaker US6 6x6 due to its robust construction and excellent cross-country capability. The weapon system was then standardised in 1943 as the BM-13N (“N” meaning “normalizovanniy” - ‘normalised’).  1,800 of this version were built.  By the end of the war, total Katyusha production had reached about 10,000.

The Katyusha was greatly feared by German infantry.  A battery of four BM-13 launchers could fire a salvo in 7–10 seconds that delivered 4.35 tons of high explosives over a 400,000-square-metre (4,300,000-sq-ft) impact zone, an effect roughly equivalent to that of 72 conventional guns.  Katyusha batteries were often massed in very large numbers, with devastating effect.  The distinctive howl of the rockets added to the psychological impact of the weapon.  The Germans nicknamed the Katyusha “Stalinorgel” (“Stalin’s organ”), because of the launcher’s supposed resemblance to a church organ.

This highly detailed plastic kit depicts a BM-13N Katyusha, comprising a Studebaker US6 6x6 truck with a rotating and elevating rocket launcher.