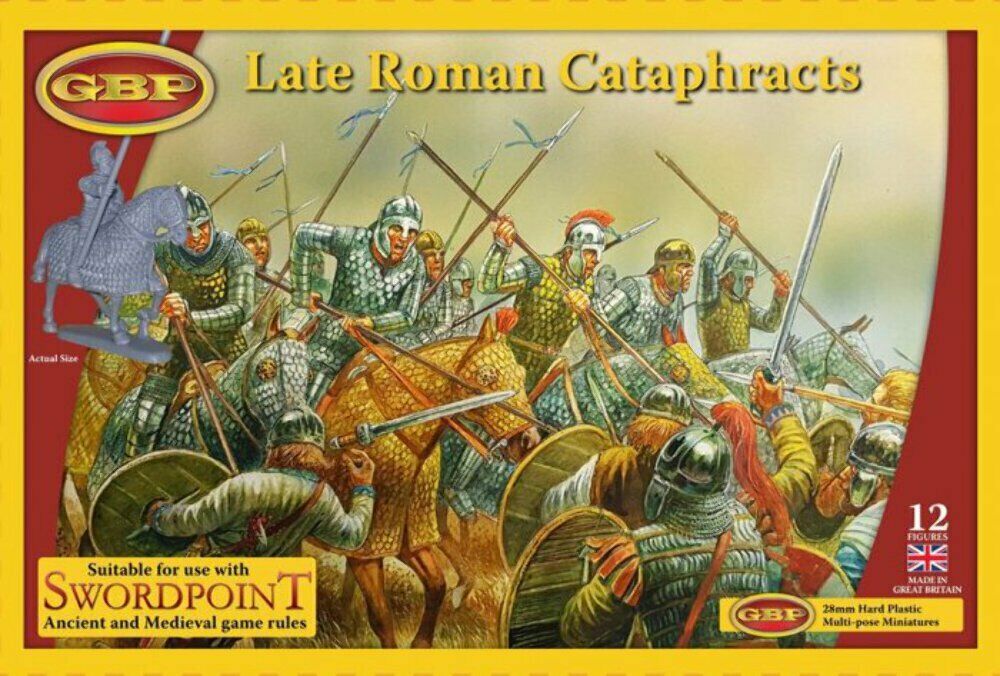 Inside you will find parts to assemble 12 finely-detailed armoured cavalry with kontos, suitable for use in Swordpoint. Parts from this box are compatible with most parts from all our other box sets so you can do many, many conversions.

Equites cataphractarii were the most heavily armoured type of cavalry in Late Roman field armies. Mounted on fully armoured horses and wielding an extremely long spear with both hands, cataphracts operated in close and controlled formations at relatively low speeds but were a potent strike force, taking on infantry and cavalry alike. Unfortunately, the all-encompassing armour, so effective against missile weapons, was heavy and uncomfortable for both rider and mount. Horses often suffered from heat exhaustion and once the unit’s formation was broken, cataphracts became vulnerable to lighter troops.

There are nineteen cataphract regiments listed in the Notitia Dignitatum, four in the West (including one in London) and fifteen in the East of the Empire, and although one is an elite Schola unit (Byzantium) and a couple are Palatini, most are treated as part of the regular assembly of troops.

Despite the lack of elite status, a tendency to be one-charge-wonders and a short period of potency in any one battle, the most important thing to remember about the Late Roman Cataphract is that they are cool and they look it too.

Sculpted by Bob Naismith. Painted by Brush Demon and from the collection of Lord S.

Supplied unpainted and unassembled. This product comes with six 50x50mm bases from Renedra.