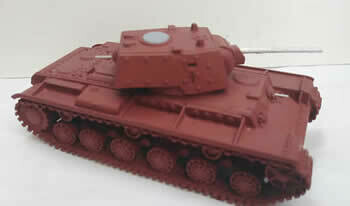 Before the model 1941 production started and the factory was relocated near the Urals, many KV-1s were taken over for an expedient armour improvement. These versions, called “Ekranami” (“with screens”), received tailored 20 mm (0.79 in) soft steel plates, bolted-on (with huge bolts), as appliqué to the turret, frontal glacis and sides of the hull. These KV-1Es were mostly surviving units of the earlier model 1939, which were up-gunned with the F-32 in the same process, and later 1940 and 1941 models, sometimes damaged and recovered tanks.