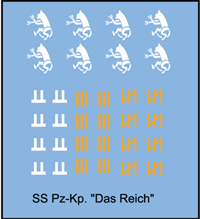 The tactical marking of the division was a Wolfsangel rune, normally painted in white or yellow. A temporary insignia in the shape of a horizontal bar with two vertical bars was in use prior to the battle of Kursk.