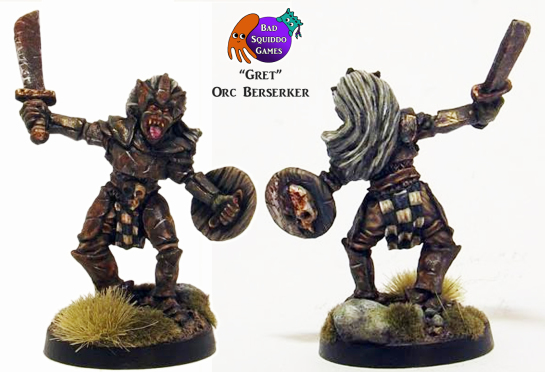 Gret should be dead by now, nobody would disagree with that. It’s not that is she is particularly old or anything, just the law of averages and physics also agrees – she should be dead.

No matter how thick the melee, how numerous the enemy, how deadly the enemy, Gret is always at the front of the charge, swirling and screaming, hacking and slashing. She is a blur of blood and blade. It’s a surprise she can see through the enormous mane of wild hair, but it’s as if she doesn’t even need to – she fights with a blind rage.

A bit of a weirdo around camp, the others tend to avoid her. Whilst being far from a skilled artizan, Gret isn’t too bad with some basic smithing and crafting, and can be seen in the evening wandering around picking up “tokens” from corpses, and fashioning them into what I guess she declares acceptable clothing and accessories. I don’t know, nobody has ever asked.

This 28mm scale unpainted metal miniature comes in two parts and with a plastic 25mm base.

She is 30mm to the eyes, 34mm to the top of the head. Obviously a little bigger and bulkier than humans. She is the biggest of the Orcs so far, but that’s reflecting her larger size even among her peers.