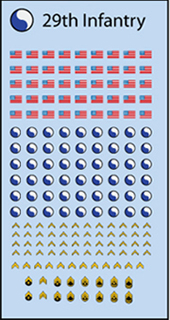 The 29th was nicknamed the "Blue and Gray" Division - from its formation in 1917 it included soldiers from both sides of the divide from the civil war. The 29th landed at Omaha, its 116th regiment suffering terrible losses, and later fought in the bloody fighting for the securing of the beachhead and the breakout. Our "Beyond Omaha" scenario pdf focuses on the 29th and 2nd Rangers.