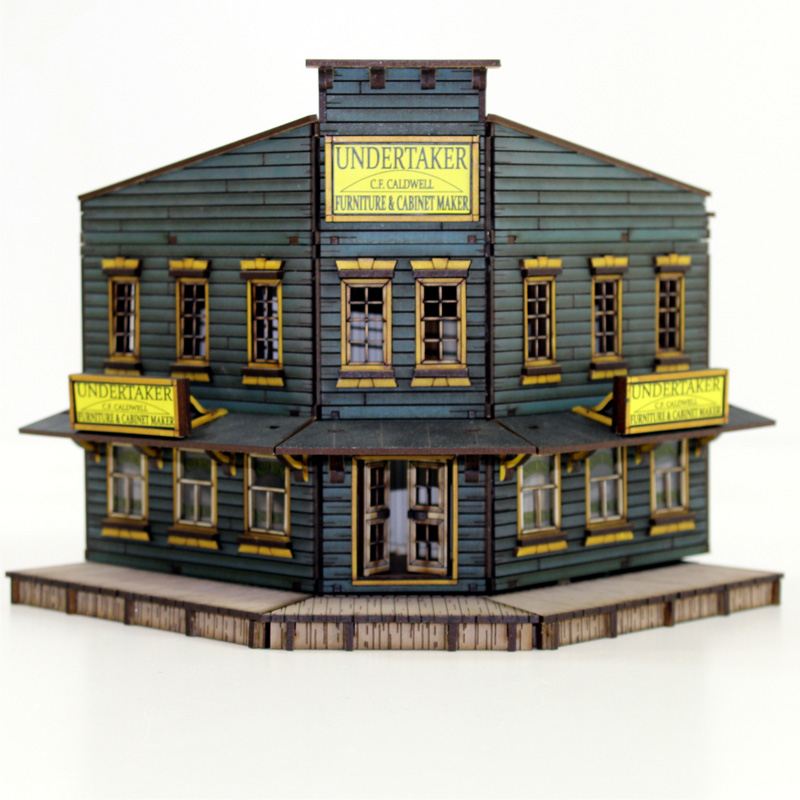 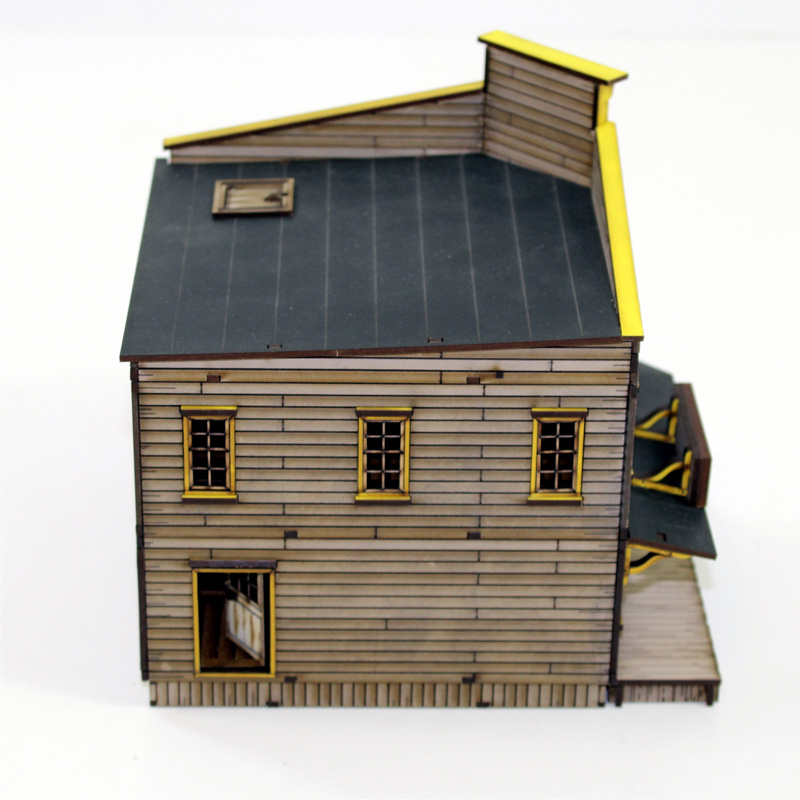 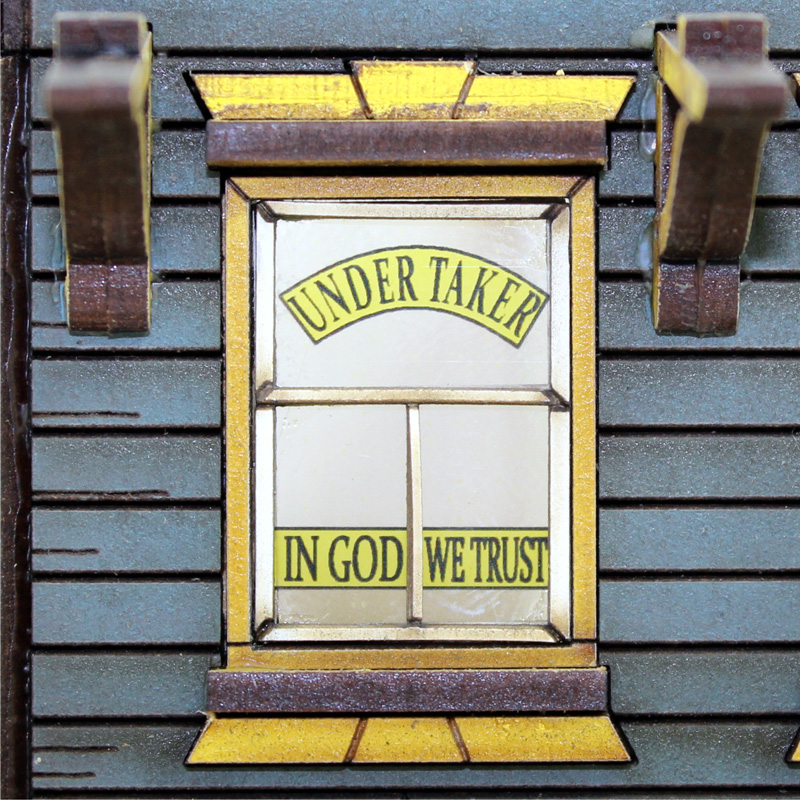 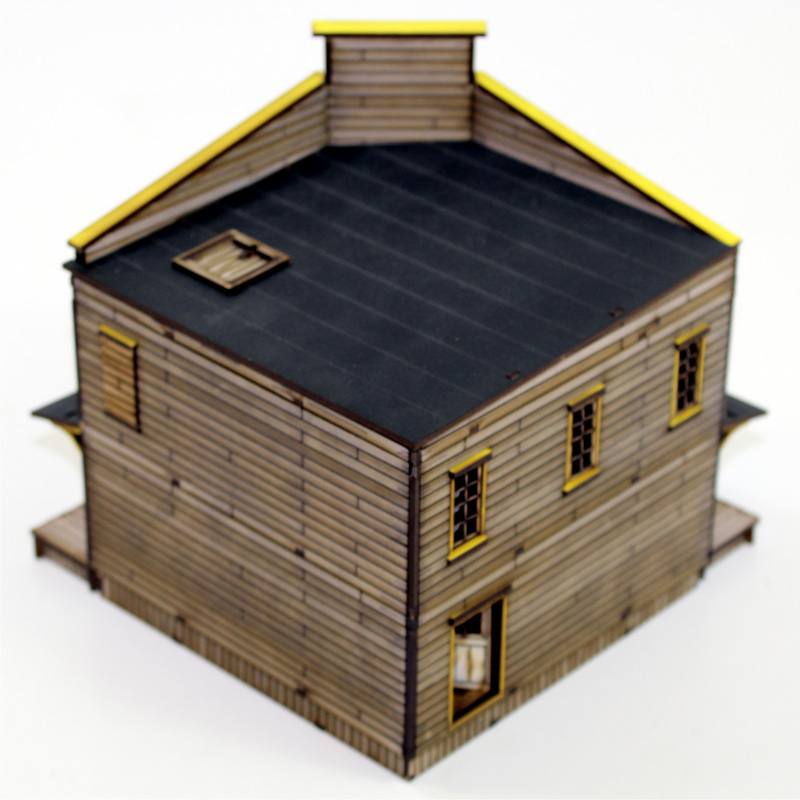 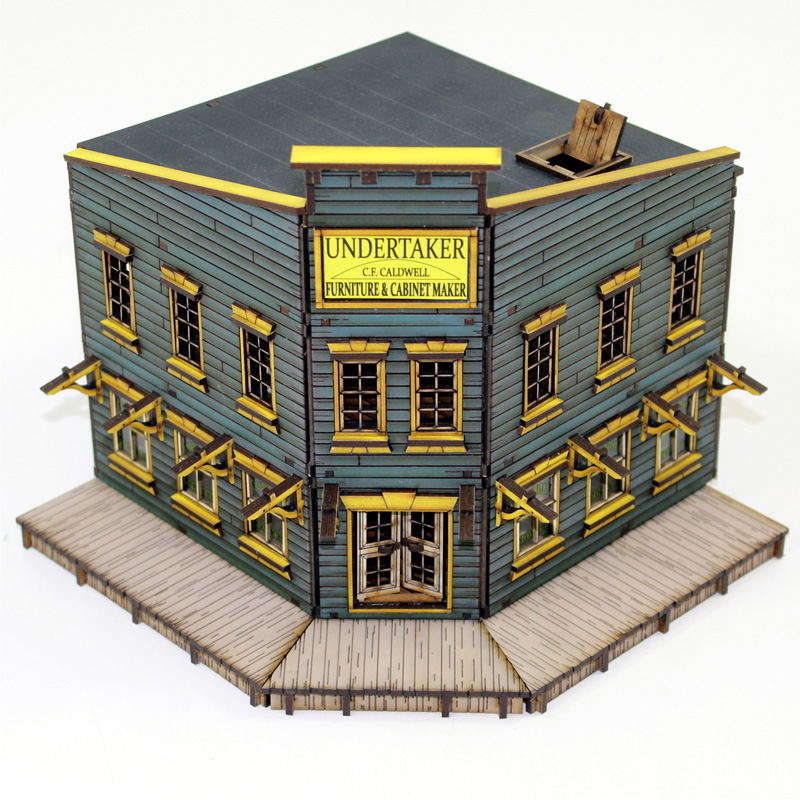 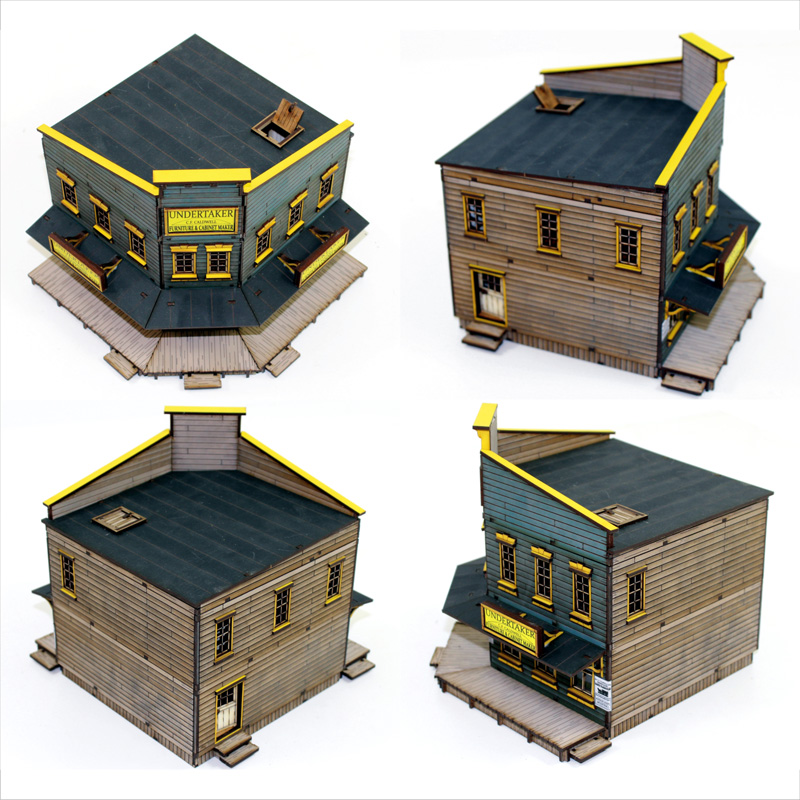 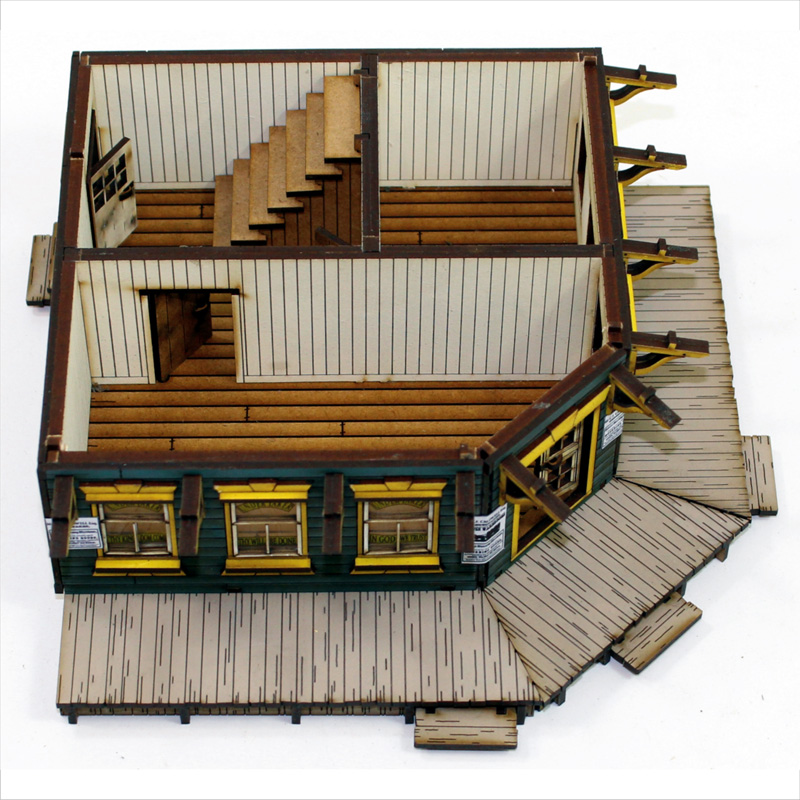 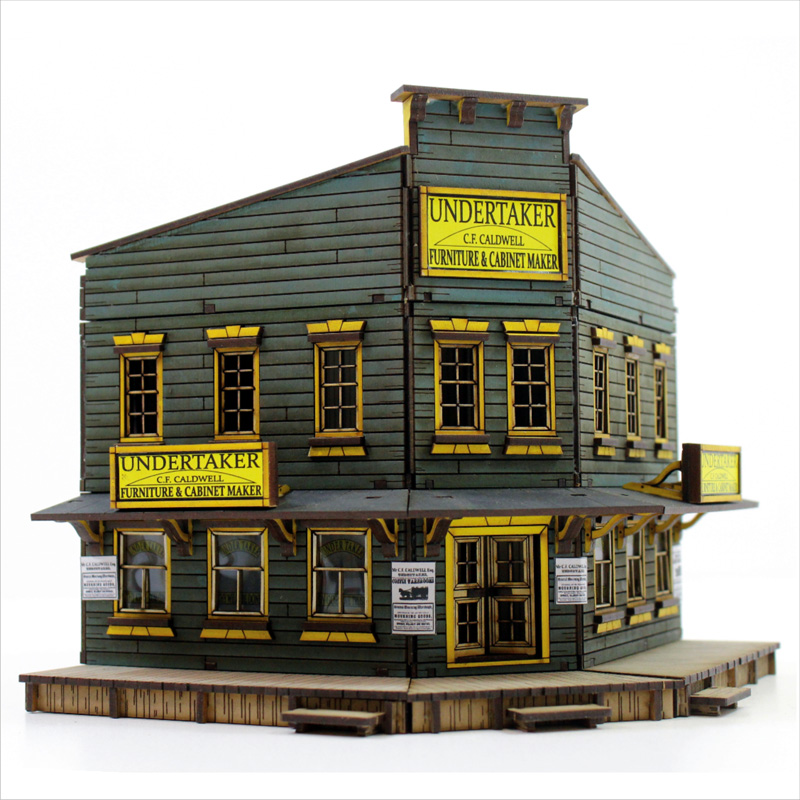 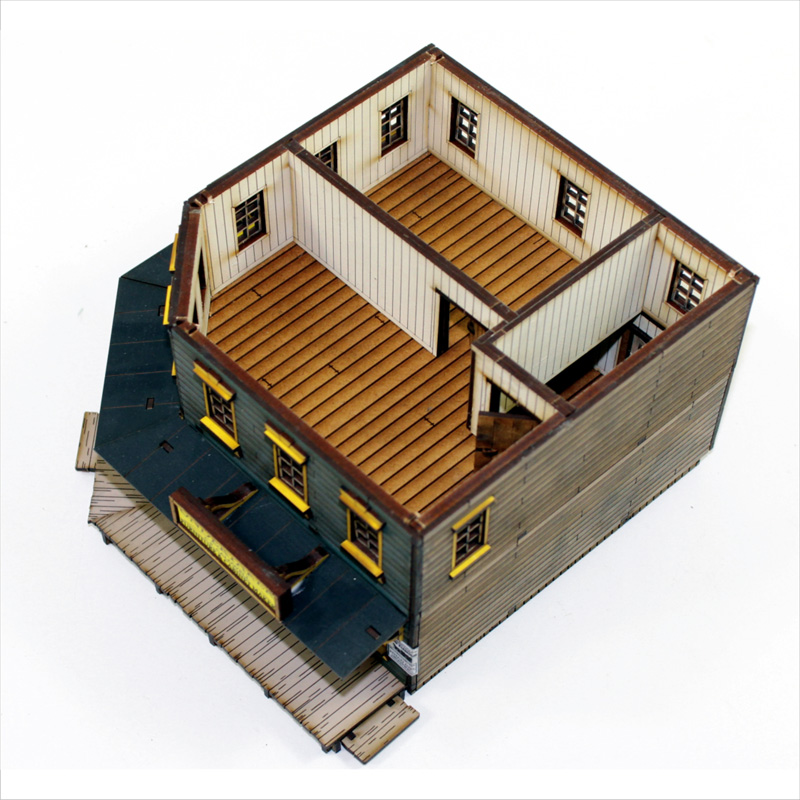 This will be a first for three new features to the range; this building is the first on sub-base C (a street corner sub-base); second, it is built with horizontal clapboarding (an older style of building ideal for an ACW period game and lets not forget the likes of Django set in the 1850's); third new feature is window glass as standard with all wider shop windows (so that's the larger downstairs not smaller upstairs windows).

This is the most extravagant DMH building to date. The building pictured has had nothing added except for the PVA/wood glue used during construction of the kit. This corner building comes with sub base C and its boardwalk decking enabling it to fit seamlessly along the boardwalk on ‘the corner of main street.   These bases may be modelled into a gaming board permanently, allowing you to create a realistically modelled gaming area but still allowing flexibility with the placement of buildings.
As a feature building with large shop windows it also has glass (acetate) shop windows with painted advertising of his trade.  All doors (exterior and internal) are pin hinged and this building has an internal staircase.

Built from the earlier post and beam framing with clapboard siding, rather than cheaply balloon framed, its older style construction makes this building perfect for the1830’s, 40’s and Civil War periods.  This type of framing required carpenters, were as carpenters said ‘all Balloon Framing needs is lots of long milled timber and a bucket of 6” nails’.  Our Undertaker was an apprentice served Cabinet maker, by trade the senior qualification for carpenters, so no wonder he opted for this more costly but more substantial form of timber framing.

During the Civil War a large number of carpenters made boxes for burials and also worked for the Embalming Surgeons during their service.  From this on the job training, and with the invention of formaldehyde in 1866, Undertaking moved from being a job of necessity to a lucrative craft. Many of these men moved out west (where life was short) and earn ten times more than they would of done back east as furniture makers.

Hardly surprising the Undertaker was one of the wealthiest people in town when charging between $4-$7 just for a plain box coffin, while also preforming funerals and hiring out morning wear to families they could charge lots more. For the Undertaker though the best business were lone gunmen and bandits where the sheriff would turn over all of the deceased’s belongings to fund a funeral, when one pistol is worth $25 who is gunna complain if you sell their stuff off for a plain box and no ceremony.

Weight 850g for postage purposes. See Customer Service page for details of postage charges. Scenery and miniatures are shown for scale and are not included.