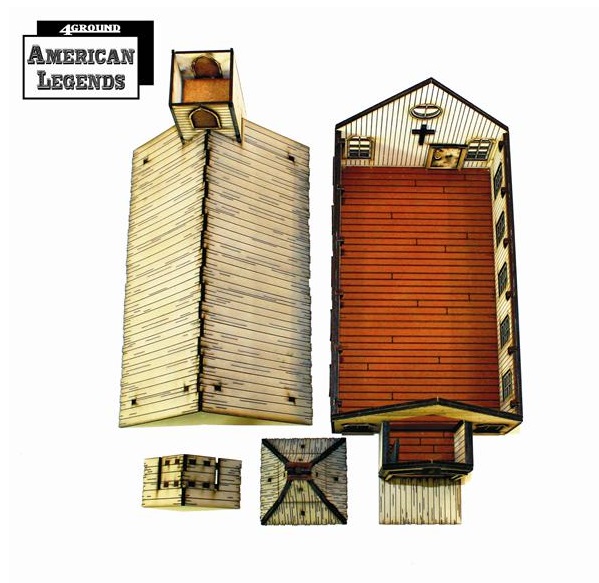 This kit includes pre-painted parts with high levels of internal and external detailing.  In the Church most walls, external and internal, are double skinned for strength and to enable detailing inside and out of the model.   The roof can be removed for easy in-game access, all windows have acetate and all doors are working.  The set also comes with over 52” of weathered wood picket fences, 24 grave boards, the church sub-base and a wooden cellar entrance.

Preacher Samuel Johnson was born in Connecticut in 1847 raised by his Methodist parents and, filled with the divine spirit, he became a preacher in 1865 without being appointed by any church to do so.  Again inspired by the Lord in 1876, he knew he had to travel west ministering as he went.

Preacher Johnson was inspired to head for the town of Dead Man’s Hand and on May 8th 1876 held his first service while walking on foot towards the town.  That service was held with 30 men and five women in attendance. On May 11th they safely arrived in the town, without once being threatened by road agents or Indians.

Preacher Johnson started his life in the town by working odd jobs during the week, while every Sunday he was on Main Street preaching.  As the population of Dead Man’s Hand grew so did Johnson’s flock and, thanks to the good Christian folk such as Albert Miller and Christopher Caldwell, in 1879 his congregation had built the first chapel in Dead Man’s Hand.

Now the Preacher Johnson’s chapel is known as ‘the church’ and most folks know of him as Reverend Johnson, he still holds his church services every Sunday where he preaches about the inequity and vileness of some of Dead Man’s Hand prominent residents, the likes of Stuart Wheatley and ‘Slick’ Dan Pottinger to name but two.  If he keeps upsetting the wrong people the rumour going round is that someone may find him on the road killed by ‘Indians’ very soon!

The buildings pictured have had nothing added except for the PVA/wood glue used during construction of the kit. Each building sits on a raised base. These bases may be modelled into a gaming board permanently, allowing you to create a realistically modelled gaming area but still allowing flexibility with the placement of buildings. Miniatures not included.