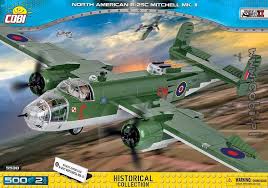 The B-25 Mitchell was a medium American bomber used during World War II, named in honour of Major General William ‘Billy’ Mitchell, a pioneer of US military aviation. The B-25 was a twin-engine mid-wing characterized by three-point landing gear and double tail. It featured a wide fuselage with places for pilots next to each other. B-25B version gained fame as the first bomber used in USAAF front-line units. After the war ended, many B-25Bs remained in service, operating across four decades. There were 120 planes in this version built.

The construction block model of B-25B has easy-to-open pilot’s cockpit, retractable landing gear, rotating flaps, and doors that can be opened to drop bombs.

Weight for postage purposes is 600g. Full details of postage rates are available via the Customer Service page (see link at the bottom of this page).