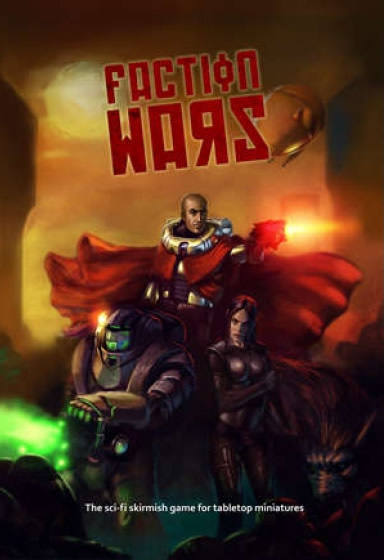 Faction Wars is a skirmish game designed for 2 or more players and involves using 28mm miniatures on a table along with some terrain to represent your forces. Each player has a squad of around 10 to 15 models with which to beat their opponent.

Most wargamers who are interested in the sci-fi genre will already have a large collection of suitable miniatures. Instead of having to buy more, you can use the ones you have got to play Faction Wars.

The game is very easy to learn, but still offers a level of detail that should engage even the most experienced wargamers. Faction Wars is set in the not-too-distant future, so some of the technology and weapons will be familiar, but with plenty of added science fiction to bring the universe to life.

The human race has escaped the clutches of Earth and colonised the galaxy. The invention of wormhole technology has allowed the vast gulfs of empty space to be crossed. However, this vastness is also leading to the downfall of the Commonwealth. The supreme political figure is the High Guardian, who is losing control over the rapidly expanding wave of colonisation. A number of factions, all with greatly different agendas and ideas battle against each other in small skirmishes right across the galaxy.