I’m painting up a few test figures so I can help decide which WWII force I will be painting next. One idea is to do a late war platoon of Luftwaffe Infantry or Feld-Division (L) with a Marder II, comprised of a mix of Artizan panzergrenadier models and standard Heer troops.  The models in the guide are painted to a good standard for gaming and, as befits WWII figures, highlights and detail are not heavily accentuated. These are the colours I used; all Vallejo:

I haven’t listed the flesh, black/white and metal colours I used but, for information, I tend to use Vallejo Gunmetal Grey and Natural Steel for metal, often darkened with a bit of black.  For the skin on these models I have used Vallejo Brown Rose, washed with Sepia Ink (Vallejo Game Color range) and then lightened up with Medium Fleshtone and white. I have undercoated this model in Burnt Umber to provide a good base for the camo and all of the other areas on the model. 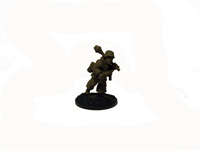 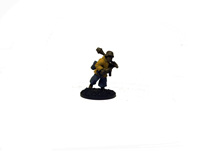 To help me get the final camo effect I wanted I washed the painted areas with Army Painter Strong Tone mixed with a bit of black ink and some water to avoid the shading getting too deep and heavy. 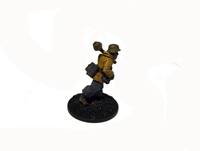 The first camo colour, Luftwaffe Camo Green, is painted on in three stages. It can be done in one stage by skipping the second and third but painting broader stripes in the first stage. I chose to do it this way after examining the pattern in detail and deciding to spend a bit of extra time. First, thinning the paint a little, and using a picture of a jacket as a guide, the green patches are painted on slightly smaller than they will eventually be. 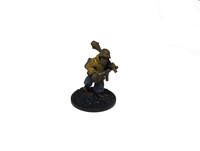 The second stage is to thin the Luftwaffe Camo Green a lot and paint carefully over the outlines of the first stage. In some places you may need to go over it again. This creates a smooth, blending effect, much like you see on the life-size jacket on which the edges of the green and brown camo are diffused. 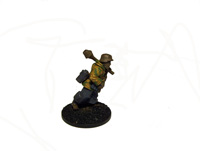 The third stage is to mix a darker version of the Luftwaffe Camo Green (I added some US Dark Green), thin it a little, and paint small areas in the middle of the green camo colour on the jacket. As with the second stage, this makes a subtle difference. 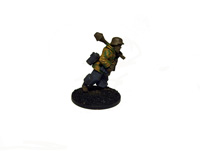 The same is done with the Flat Brown camo although I avoided painting the brown over the green, more often leaving a sliver of the jacket base colour between the patches. I find that this process is much quicker and requires less painting as the green does much more of the “work” in the camo pattern. Again, this could be cut down to one step, but I found the process very quick and easy on one figure and could translate that easily and even more quickly on a batch of models. 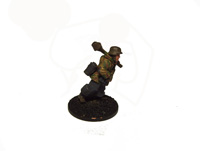 This final two steps can be skipped if desired as the camo will look fine as it is at this scale, but I first used the base German Camo Orange Ochre, thinned with water, to give the jacket base colour a bit of a boost (sometimes the base colour can get lost) and provide a little highlighting.

Finally, I mixed a darker shade of Luftwaffe Camo Green, thinned it slightly, and painted delicate strokes of paint on the jacket base colour, sometimes overlapping the green and/or brown. It’s quite delicate work; it doesn’t take long, but does pull the whole pattern together; I think it’s worth it. After this, a quick varnish to protect the paintwork is provided by Testors Dullcote. 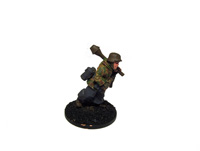 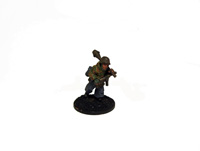 The skin was finished and the faust highlighted with Russian Uniform before getting a thin wash around the top with Army Painter Strong Tone. The MP40 was subtly highlighted and washed with black. The helmet was basecoated in Luftwaffe Uniform. 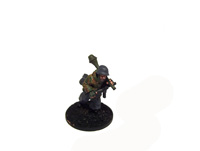 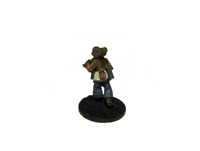 After a dose of Testors Dullcote varnish, a second “wetbrush” of Luftwaffe Uniform adds a highlight to the helmet and a bit of white is added to paint a very thin highlight on the edges. A very light wash of black ink mixed with a bit of brown finishes it off.

The base is done in three layers – Burnt Umber, Flat Earth, Brown Sand – before a final dose of Testor’s Dullcote. A selection of tufts finishes of the base. 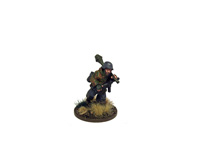 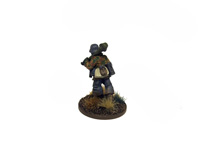