I have a very large Canadian force using metal Bolt Action figures that I used a lot during the playtesting of Rules of Engagement. After a lot of demo games they’re a bit beaten up now but, as I have been painting a British force, I won’t replace them. However, in this guide I will go through the colours I used for painters of Canadian troops. These are the colours I used; all Vallejo.

I haven’t listed the flesh, black/white and metal colours I used but, for information, I tend to use Vallejo Gunmetal Grey and Natural Steel for metal, often darkened with a bit of black.  For flesh I have used Vallejo Medium Fleshtone.

As with all the WW2 figures I paint, I start with a basecoat of Burnt Umber.  I just find that the brown and green colours of the uniforms go over a dark brown undercoat more easily than over black. 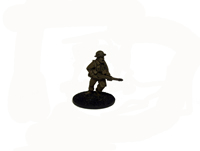 First step is a basecoat over the battledress. I mix equal parts of English Uniform, USA Olive Drab and Burnt Umber. The Canadian battledress was made of a different, higher quality cloth than the British and was of a greener hue.  This colour also acts as a good base webbing. A second wetbrush of the battledress colour with a tiny bit of white added gives the first highlighting stage.

By adding a little white to the colour (which is thinned down a bit at this stage) the jacket and trousers are highlighted in two stages.  The first highlight is quite broad, the second concentrating on just the most raised areas. 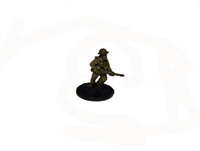 Russian Uniform is the base for the webbing. The gaiters are done at the same time. An alternate khaki shade of webbing is described in the British painting guide. Flat Earth is used to pick out the water bottle and handle of the entrenching tool. Then he gets a dose of Testor’s Dull Cote to protect the paint while I continue to work on him. 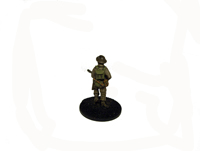 The webbing was highlighted twice by Green Grey to the Russian Uniform colour. The gaiters were done at the same time. The webbing highlights may seem to be a pain but when batch painting you get used to them very quickly. At this point the buckles are picked out as is the spade handle by the small of the models’ backs.  The scabbard and boots are simply done in black. 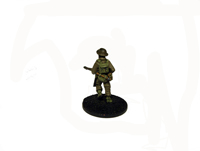 The helmet was painted US Dark Green and the strap Flat Brown. White was added to both for a highlight. The skin was basecoated at this point and the rifle was given a coat of Flat Earth. The skin was also given a wash of Vallejo Skin Wash. 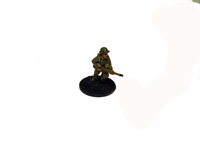 The skin is finished and then the rifle – adding Medium Fleshtone to the Flat Earth base colour I painted paint thin stripes, then adding a little white thinner stripes were added. Finally, thin strips of Charred Brown were painted between the lighter ones. Once the metal is then done, the rifle is washed with a Black/Brown ink. 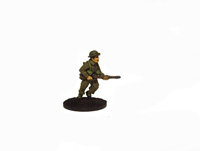 The base is first drybrushed Burnt Umber, then Flat Earth followed by a very light Brown Sand.  After a varnish with Testor’s the bases got some static grass, tufts and flowers (see them all in the GEG store). 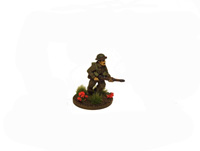 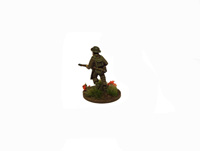 A final picture shows a Canadian and British infantryman together. 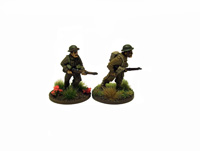