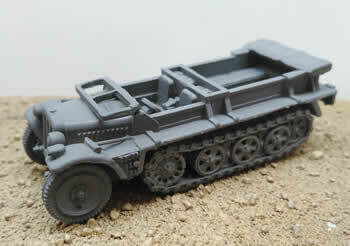 The Sd.Kfz. 10 was unique among German half-track designs as it used a hull rather than a frame. Power was at first provided by a military version of a Maybach 6-cylinder water-cooled gasoline engine. It had a semi-automatic Maybach Variorex-transmission SRG 102128H (Schaltreglergetriebe 102 128 H) with seven forward and three reverse gears. The driver selected the desired gear and initiated the shift by depressing the clutch. It could attain 65 km/h (40 mph), while the cruising speed was 45 km/h (28 mph).