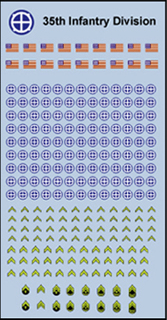 The 35th "Santa Fe" Division landed in Normandy in July, 1944, playing a key role in the taking of Saint-Lô and further operations in the Battle of Normandy. It fought at Bastogne and in the Netherlands, and crossed the Rhine in early March, 1945. Here's a good link: 35th Infantry. The divisional insignia is the Santa Fe cross which was adopted the nascent division's units trained for WWI in the area of the old Santa Fe trail.