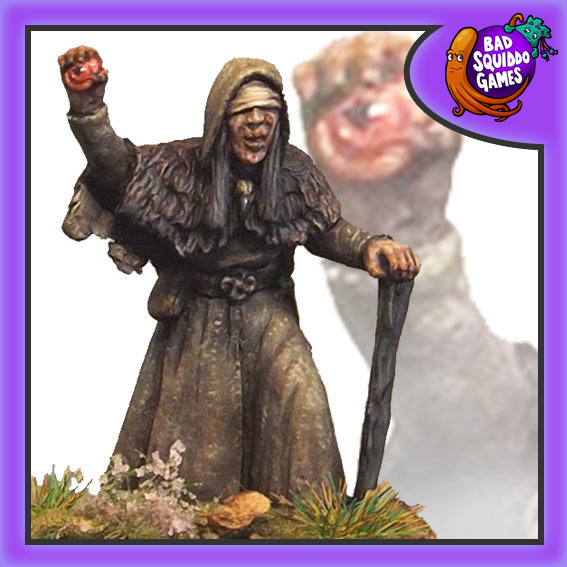 The seer, or vǫlva, is sculpted by Shane Hoyle and shown painted by Paul Cubbin.

"The vǫlur were referred to by many names. Old Norse vǫlva means "wand carrier" or "carrier of a magic staff",[1] and it continues Proto-Germanic *walwōn, which is derived from a word for "wand" (Old Norse vǫlr) Vǫlur practiced seiðr, spá and galdr, practices which encompassed shamanism, sorcery, prophecy and other forms of indigenous magic associated with women. Seiðr in particular had connotations of ergi (unmanliness), a serious offense in Norse society.

Historical and mythological depictions of vǫlur show that they were held in high esteem and believed to possess such powers that even the father of the gods, Odin himself, consulted a vǫlva to learn what the future had in store for the gods. Such an account is preserved in the Völuspá, which roughly translates to "Prophecy of the Vǫlva". In addition to the unnamed seeress (possibly identical with Heiðr) in the Vǫluspá, other examples of vǫlur in Norse literature include Gróa in Svipdagsmál, Þórbjǫrgr in the Saga of Erik the Red and Huld in Ynglinga saga.

In Norse society, a vǫlva was an elderly woman who had released herself from the strong family bonds that normally surrounded women in Norse clans. She travelled the land, usually followed by a retinue of young people, and she was summoned in times of crisis. She had immense authority and she charged well for her services.[11] In addition, many aristocratic Viking women wanted to serve Freyja and represent her in Midgard. They married Viking warlords who had Odin as a role model, and they settled in great halls that were earthly representations of Valhalla.[9] In these halls there were magnificent feasts with ritualized meals, and the visiting chieftains can be likened with the einherjar, the fallen warriors who fought bravely and were served drinks by Valkyries.

However, the duties of the mistresses were not limited to serving mead to visiting guests, but they were also expected to take part in warfare by manipulating weaving tools magically when their spouses were out in battle. Scholars no longer believe that these women waited passively at home, and there is evidence for their magic activities both in archaeological finds and in Old Norse sources, such as the Darraðarljóð."