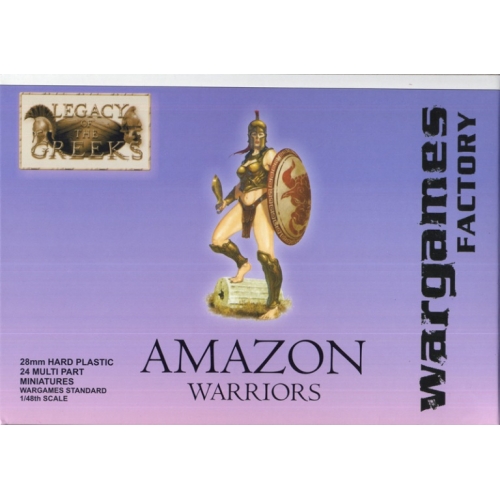 Although the figures in this set have a dubious historical link, a number of ancient historians mention fierce warrior women. Herodotus says, "The Amazons (also called oiropatas - man-killers) were taken captive by the Greeks and put on board ship where they murdered the crew. However, the Amazons didn't know how to sail so they floundered until they landed by the cliffs of the Scythians. There they took horses and fought the people. When the Scythians figured out that the warriors they were fighting were women, they resolved to impregnate them and schemed accordingly.

The Amazons didn't resist, but encouraged the process which was complicated by a language barrier. In time, the men wished the women to become their wives, but the Amazons, knowing that they couldn't live within the Scythian patriarchy insisted the men leave their native land. The men obliged and a new land was set up. These people became the SAUROMATAE who spoke a version of Scythian adapted by the Amazons." In recent years there have been a number of archaeological finds, and re-examinations of older ones, in Russia and Ukraine that prove the existence of warrior women of high social standing.