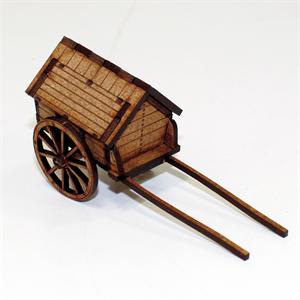 A good looking addition to the growing range of 4Ground’s laser cut Carts and Wagons for wargames terrain.

Strong Box horse carts were primarily used by armies for the transportation of black powder, as their design meant they were easily sealed from the risk of accidental ignition!!! They were also used for another important roll, the ‘SAFE’ transportation of coinage for the wages to pay the soldiers of the army. Eventually it would evolve into the many army ammunition carts of later historical periods. A great piece of scenery or ideal as a game objective.