So, last time we looked at Banditos and 7th Cavalry, now it's Renegade Indians and Pinkertons. First up is the Renegades:

“You white eyes want us all dead, but when I die,it will not be as a reservation Indian. ”

This gang is a much different one to most gunslinging mobs, in that many of the abilities and gang cards emphasise mobility and hand-to-hand fighting. That's not to say that the Renegades are unsuited to a bit of gunfighting - they'll be armed with pistols and the occassional rifle - and this fact should be at the forefront before you're tempted to charge in at first sight with tomahawks waving and a blood curdling scream! Striking in hand-to-hand combat is about timing. The Keen as the Hare ability will allow the Native Americans to pull braves out of impending trouble and re-position them more effectively than other gangs can.

The Warcry and Wardance cards are potentially powerful - especially the latter - but their effects can appear subtle or not as effective as other gangs' cards, but every ability and card is focussed on mobility, adaptability and the final coup de grace in delivering a Dog Soldier to revel in some scalping! But it's not all about that, as the Renegades are eminently capable of ranged fighting and that should be their staple. 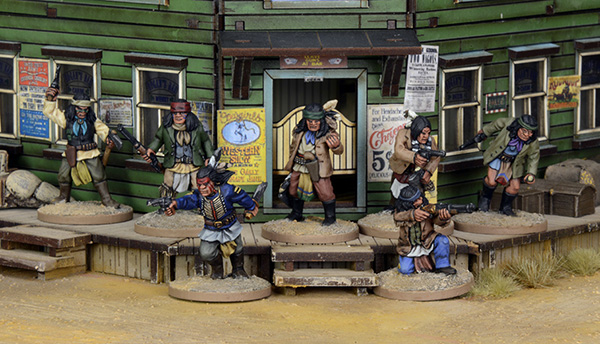 “Many people describe the Pinkerton Detective Agency as nothing more than a gang of hired thugs, men who bring justice at a price. I say that my men and I are often the only thing that stands against injustice of all types. Sometimes the good men of the world cannot be found when they are needed and it stands to other men to make the difference. A paid professional will not waver in the face of impossible odds, my men cannot be swayed by emotion, they stick to the task no matter what that is.”

The Pinkertons are ruthless, proficient at tracking down their man and taking him in (or down). They boast a typical range of weaponry with plenty of access to shotguns and repeaters and have an improved nerve score like Desperado gangs. Once a Pinkerton gang is onto you, it's best to give up early or go out with all guns blazing. The "We Never Sleep" rule will have your opponent feeling dogged from early in a scene, and with cards like "to the End of the Earth", any stray target that wants to hit and run is going to find his plans very difficult tio execute.

Two of the Pinkerton gang cards deal with "getting their man". Both are very scary abilities that will strike terror into the hearts of those on the end of their use. 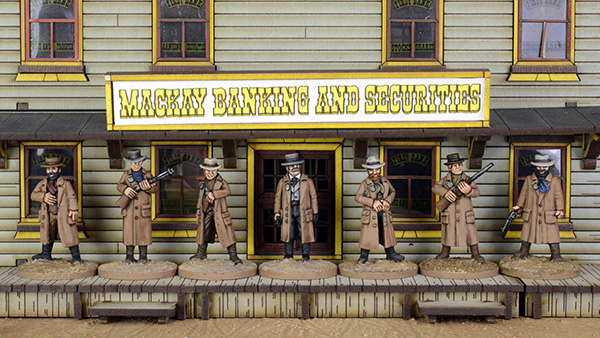