As you probably know by now, there are four new gangs for DMH and here we introduce the Banditos and 7th Cavalry. They are presented in the book in the exact same manner as the DMH rule book, so are designed to be used in the same way as in that rule book. You can use them to play pick up games of three scenes, or select from their roster to recruit an ambitious and compact group of men.

“For years we have watched men heading south in to Mexico to escape the law. We have walked a different path all our lives, this path has lead us north on to the streets of Dead Man’s Hand. The north is full of rich cattle barons and banks bursting with so much money and gold that they struggle to keep it all in. We are here to help out, taking on the burden from those too weak to carry or protect it themselves.”

The profiles of the Bandito characters is the same as the other gangs, but they have one significant characteristic: A Plethora of Pistols. These guys are festooned with weapons and ammo so you will not have to worry about awkward out of ammo results. Importantly, if a model takes this option, he is only allowed to take pistols so you will have less flexibility in arming variety in a campaign.

In their gang rules (and in one of their cards) they have the ability to set up ambush points, disappearing from view and showing up again somewhere unexpected. Great for getting yourself out of trouble and also for mounting a concentrated attack when you're full of beans and feeling confident. There gang specific cards are fun; one that'll trump anything, one that makes use of living cover, the "guerrila" card and the card that reflects the tendency for these guys to always carry a bit of TNT. 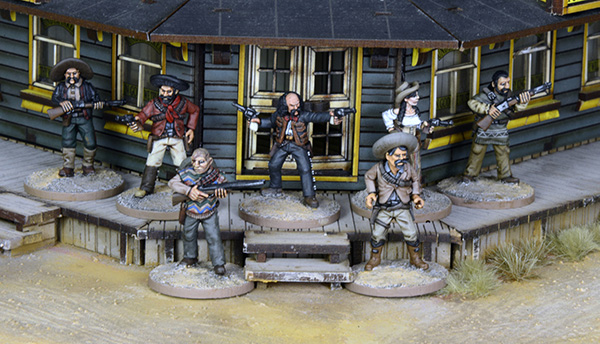 “We bring justice to the far reaches of this country. Whether pacifying the savages or running down gangs of outlaws we are a symbol of the United States for all to see. For many this symbol is something to fight against, they buck against theinevitability of civilisation that follows in our wake. These men must either change or be changed and we will be the agent of that change.”

7th Cavalry are a very different gang in terms of play style, as you might expect from one with rifles as the majority weapon. This means you have to be a very disciplined player when using them, but thankfully they have gang rules and gang cards to help them. Drilled Cavalry (gang rule) and Roll Call (gang card) can be devestating when used in concert, but the most useful aspect of the gang is the former which means that they can advance or withdraw while maintaining effective fire with their carbines.

This is a thinking man's DMH gang, and the clever use of cards like First Call and To the Colors can keep them one step ahead and determined in the face of their foes who will often have a tendency to attack piecemeal. Some can get away with that but your troopers will really get cut to pieces in they divide too much. As a side note, you may struggle in some of those opening scenes when you have to face off against pistol armed men with your carbine. Just keep some distance and keep cool... 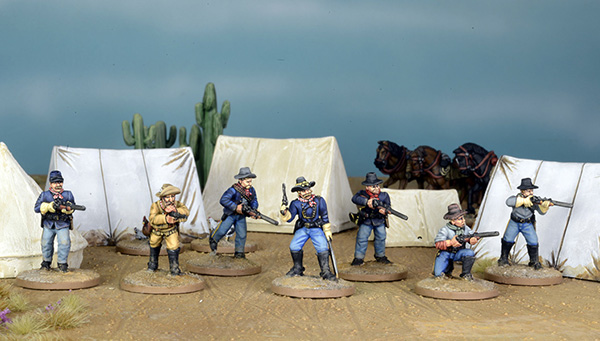