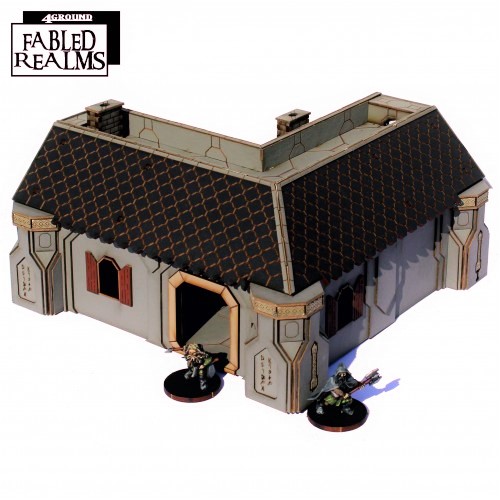 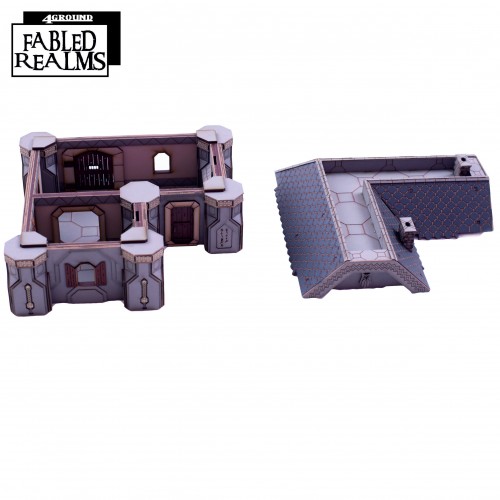 Externally and internally there is a high level of detailing through out this 4Ground model kit, both external doors actually work.  The second storey is accessed from the external stairway or via the working trap door in the second storey floor.

The roof comes off to give access during in game action. 28S-FKH-103 is a ‘28S’ 4Ground model kit, ‘28S’ means this kit is highly detailed inside and outside with many pre-painted parts. Karag-Haim was not always the most powerful Dreozende (Dwarven Folk) city, at the end of the time of Mythlond, the title was held by Karpoth-Haim near the ancient Kingdom of Dorr. But the agents of Akennikge were to cause a cataclysm that would see Karpoth-Haim’s prosperity come to ruin. One night the Dreoz of Karpoth-Haim heard a sound like thunder and a star appeared on earth in the city of Daldorr, this star was so bright some of the Dreoz who saw it were blinded as Akennikge’s hatred stole their sight. Then a winter came, the worst in living memory, some of the Karpoth-Dreozende fled to the nearby Haims bringing stories of twisted monsters stalking the winter night. Then within the next few months all contact with Karpoth-Haim was lost, the Haim now lies ruined with occasional adventurers making their way from Brogenbridge (near Daldorr) to the Haim to search for treasures and wealth, none have returned. These buildings are built in a standard style by Dreoz and can be found in any of the Dreozende-Haims, this means that they can be found from Vandul-Haim in the east all the way to Salvak-Haim in the west of the Fabled Realms. This means that any adventuring party going into Dreozganaet (Dwarven Lands) is likely to come across Offadreoz (over dwarf) Kotliff (village) or Kaezker (town) filled with this style of building. This building is for a wealthier Dreoz of the mid or lower castes as it has two rooms and two hearths. One of the rooms is the Aerzkue (main room) in which the Dreoz will have their meals and guests, the secondary room is the Anzekue (family room) in which the Dreoz will sleep. Children are Adonyzkurzt (uncast) until they come of age and therefore, if the Dreoz are wealthy enough to have at least two rooms, will sleep in the Aerzkue.