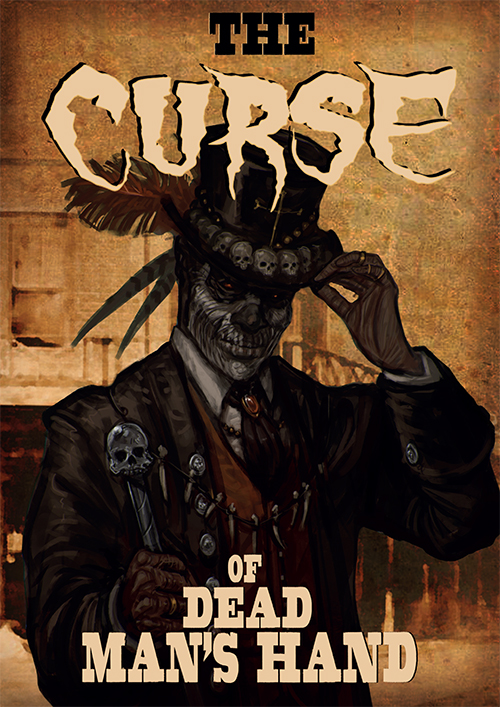 Click here to view sample pages from the CoDMH source book and more.

The curse has finally come to Dead Man's Hand. Get together anybody you can, time to put petty rivalries aside and stand together against an enemy who shows no mercy, who will take it all, and leave you with nothing, not even your soul. The Curse of Dead Man's Hand and it's contents can be used in several ways. The gangs contained within can be added to the normal roster of gangs in the usual way to play games of DMH. Each gang comes with all the information that you need to use it in a standard Legend of Dead Man's Hand campaign. The Baron's gang has to be used in a slightly different way as he is not interested in the petty rivalries of men, he is only interested in one thing, the destruction of mankind and the swelling of his host.

The other option that the book contains is a two player narrative campaign between the Baron and whichever gang feels that it is brave enough to try to stop him. The campaign follows a story line with the combatants trying to wrestle control of DMH from the other. Each game leads to another and the result of each game has consequences and directs future game play.

You need a copy of the Dead Man's Hand rule book to use this source book.

The Story So Far

Full rules for The Baron, The Seven, Mountain Men and The Malevolent Seven, including schemes and skill advancement for playing campaigns.

The Forces of Good

It's not all bad! Profiles for Buffalo Man, Mountain Lion and Cheveyo Death Hunter.

The Curse of Dead Man's Hand

A narrative campaign for a courageous band to face the Baron!

Weight for postage purposes is 110g. Full details of postage rates are available via the Customer Service page (see link at the bottom of this page).