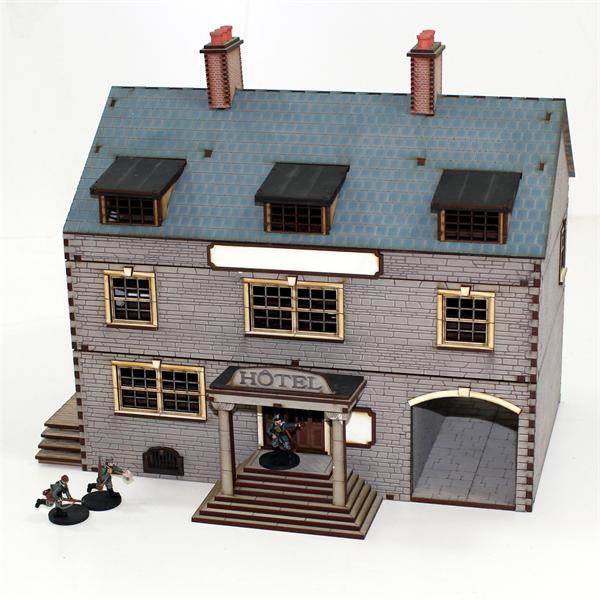 28S-WAW-113 is a ‘28Standard’ 4Ground kit, as you would expect it has loads of detail and pre-painted parts.  Each storey is removable allowing maximum in-game access to each one of the many rooms. The storeys are held in place with locator lugs in each corner.

Please allow up to 5 days for this item to be in stock.

This Stone Hotel will look great on any Napoleonic or Post Napoleonic battlefield, this style became common from the 1800’s onwards, with many examples from as far away as Russia to Northern Spain and Northern Italy to Britain and Scandinavia still standing today.

As a part of 4Ground’s immensely popular ‘World at War’ range for WWI and WWII it makes a great defensible objective in any European action.  Add this building alongside the Grand Stone hotel, with it’s Stone Coaching Stable and Cookhouse and the effect is an even more desirable battlefield worth fighting for!

Once the passengers had alighted from their coach to enter at the front of the hotel via the main porticoed entrance (the hotel sign on the portico can be swapped to different languages depending on where the action is based), the Coaching Arch would allow the passage of a coach and horses to the stabling behind (stables available as an add-on to this kit).  A welcoming sight in peace time for many a coach bound traveller this C18th Hotel (with better food and accommodation than a Coaching Inn) offered a welcomed respite on long journeys.  As part of a battlefield this building really helps when creating an interesting scenario; either as an operational HQ on a rural roadside or as a well defended bastion in the centre of a hard fought street fight.

The external walls for this kit are pre-painted and etched with rubble stonework coursing, with little external details like sash windows and a grilled coal chute all adding to the overall effect of this high quality laser cut model kit.   Internally the walls are also pre-painted and those walls adjoining the banistered, central staircase have oak half panelling, as do the walls in the saloon bar.  A large part of the ground floor is taken up with the saloon bar with it’s fitted bar and shelves.  Behind the bar is the access hatch for beer barrels and wine bottles from outside (an ideal point of entry in any covert action scenario game).

Weight for postage is 3400g. See the Customer Service page (link at the bottom of this page) for P&P details.