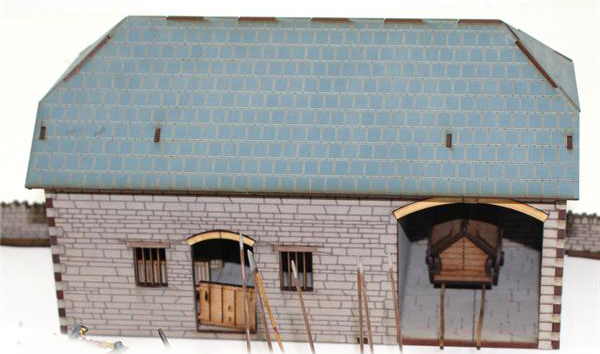 This is a ‘28Standard’ 4Ground kit, as you would expect it has loads of detail and pre-painted parts.  Each roof is removable allowing maximum in-game access to each the rooms and hayloft. The roof are held in place with locator lugs in each corner.

This Stone Coaching Stable will look great on any C17th battlefield onward, this style became common from the 1600’s onwards, with many examples from as far away as Russia to Northern Spain and Northern Italy to Britain and Scandinavia still standing today.

As a part of 4Ground’s immensely popular ‘World at War’ range for WWI and WWII it makes a great defensible objective in any European action.  Add this building alongside the Grand Stone hotel, Stone Hotel and Cookhouse and the effect is an even more desirable battlefield worth fighting for!

Once the passengers had alighted from their coach to enter at the front of the hotel the coach and horses would be taken to the stabling behind the hotel. Once there the coach would have the horses and their harnessing removed and would be placed in the coaching shed. While this was happening the horses would have been rubbed down and looked after by the coachman and any hotel staff assigned to them, then taken into the stabling block where their tack and equipment would also have been placed.

The external walls for this kit are pre-painted and etched with rubble stonework coursing, with little external details like wooden mullion windows and a stable door all adding to the overall effect of this high quality laser cut model kit.   Internally the walls are also pre-painted with 4 stalls and mangers allowing 4 horses to be kept inside, a tack and equipment area, hayloft and coach shed. The hayloft has enough space in the roof that any figure attempting to hide or to escape will be able to be placed in the hayloft.

Weight for postage is 1100g. See the Customer Service page (link at the bottom of this page) for P&P details.