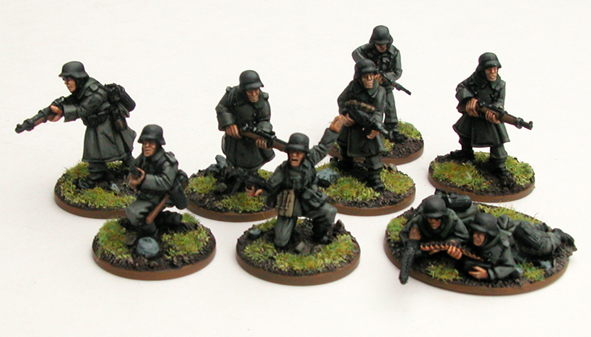 German tactical doctrine ascribed attack as superior to defence. Even when outgunned, German commanders were trained to seek ways to use speed and surprise to attack and destroy the enemy and junior officers were empowered to react to a local situation without the need to seek higher approval. By 1944, however, millions of casualties had drained the German Heer of much of its quality and the strategic situation meant that it was mostly operating on the defensive. Despite this, the Allied invaders of Normandy quickly learned to fear and respect the weapons, determination and tactical ability of the German Grenadiers. This box contains 24 detailed Artizan Designs miniatures, enabling you to field a platoon command and two infantry squads, the basic structure of a Late War German Grenadier platoon in Rules of Engagement. These 28mm metal miniatures include 10 riflemen, three light machine gun teams of two men each, 4 NCO’s, and 4 command figures. The variants of miniatures will be as described but the actual figures may vary from those illustrated.