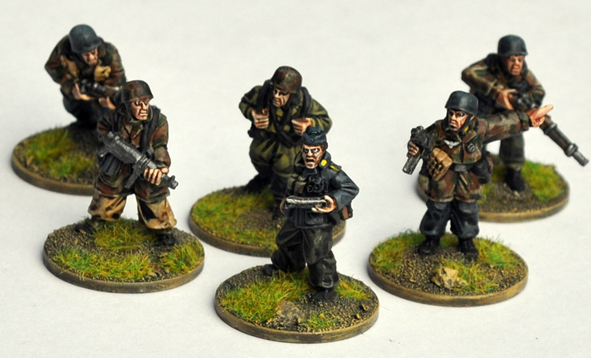 “You are the chosen ones of the German Army. You will seek combat and train yourselves to endure any manner of test. To you, the battle shall be fulfilment.”

First of the Fallschirmjäger 10 Commandments

The elite German airborne troops first gained there fearsome reputation from the daring assaults in Denmark and Belgium in 1940. Following their pyrrhic victory on Crete in 1941, the Fallschirmjäger were never to be used in a massed airdrop operation again. The “Green Devils” fought with distinction as infantry for the rest of the war, stubbornly resisting the Allies in Normandy and Italy. This box contains 28 detailed Artizan Designs miniatures, enabling you to field a platoon command and two infantry squads, the basic structure of a Fallschirmjäger platoon in Rules of Engagement. These 28mm metal miniatures include 12 riflemen, four light machine gun teams of two men each, 4 NCO’s, and 4 command figures. The variants of miniatures will be as described but the actual figures may vary from those illustrated.