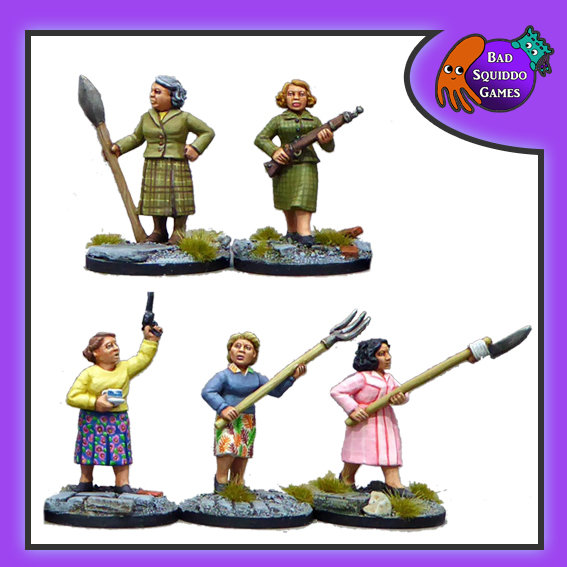 Attack! Or is it self defence? What is happening here ? Perhaps the Germans have finally landed, or perhaps it's just a randy bovine in the woods, either way, it requires some investigation and prompt improvisation! Jesse has strung up her kitchen knife to a broom handle while Timmy has found one of her husband's Zulu artifacts to be a useful weapon.

These miniatures work great in both historical WW2 games as well as pulp settings such as Operation Sea Lion.

"The Women's Home Defence was an unofficial organisation founded by Dr Edith Summerskill (nicknamed 'Flossie Bang Bang'), Labour MP for Fulham West, in December 1941. No uniform was worn just this enamel badge. Recruits underwent weapons training and many became Home Guard Auxiliaries when allowed to do so. The organisation was disbanded in December 1944 continuing as the Women's Rifle Assocation." - from the Imperial War Museum.