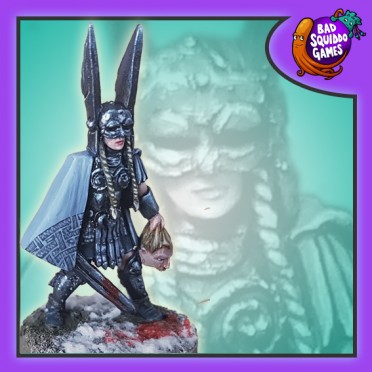 "In Norse mythology, a valkyrie is one of a host of female figures who choose those who may die in battle and those who may live. Selecting among half of those who die in battle (the other half go to the goddess Freyja's afterlife field Fólkvangr), the valkyries bring their chosen to the afterlife hall of the slain, Valhalla, ruled over by the god Odin. There, the deceased warriors become einherjar. When the einherjar are not preparing for the events of Ragnarök, the valkyries bear them mead. Valkyries also appear as lovers of heroes and other mortals, where they are sometimes described as the daughters of royalty, sometimes accompanied by ravens and sometimes connected to swans or horses."

Sculpted by Shane Hoyle and shown painted by John Morris