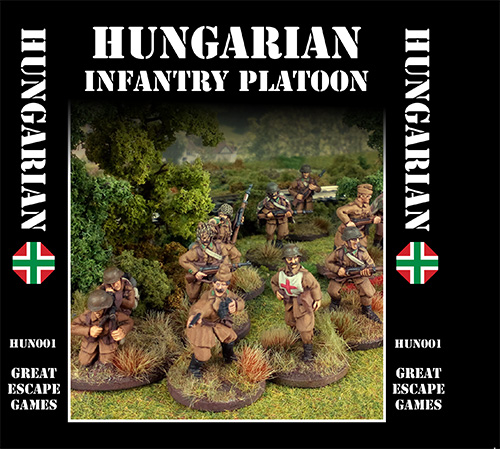 Command squad, Squad A and Squad B.

Following their declaration of war upon the Soviet Union in June, 1941, the Hungarian Army supported their Nazi allies, attached to the German 17th Army in Ukraine. Further troops were committed to the Spring offensive in 1942 and, at the beginning of 1943, the Hungarian 2nd Army was virtually annihilated by the Soviet counterattack at Stalingrad, suffering nearly 200,000 casualties.

By August, 1944, the Soviet offensive had all but crushed German resistance. Romania switched sides and, on October 6th, the Soviets launched the Debrecen Offensive. The Hungarian Third Army was destroyed and fierce battles were fought around the Tisza River against the Romanians. By the 19th Debrecen had fallen and by the end of the month Soviet forces were attacking Budapest, beginning one of the bloodiest sieges of the war.

Operation Spring Awakening in March, 1945, was the last major German offensive operation of the war. Sixth SS Panzer Army, supported by the Hungarian 3rd Army and other German forces, launched an attack to secure vital oil resources around Lake Balaton, retake Budapest and seize Vienna. It was typical of Hitler’s wild ambition and rabid overestimation of his troops’ capabilities and the offensive failed.