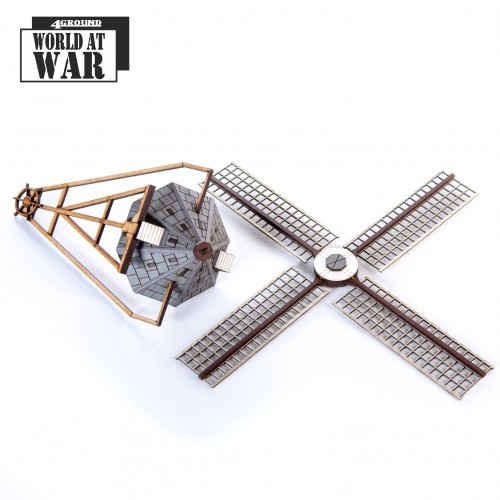 28S-WAW-141 this is a “28Standard” 4Gground kit with high detail and pre-painted parts.

Windmills are buildings constructed to harness the power of the wind and use it to create energy, especially for industry. The wind rotates
the sails which then turn the machinery inside and the most common application for this was for milling grain and pumping water. Although
many windmills had been around in Europe for a few hundred years it wasn’t until the 14th Century that they really spread across the
continent.

The earlier windmills were slowly joined by, and sometimes replaced by, Smock Mills. They were typically eight-sided, with the walls sloping
and the sails were attached to a rotating roof cap. These mills were better suited to wet/uneven ground because of a more lightweight
construction of timber and other materials. They became incredibly popular in eastern England and the Netherlands for this reason and were
used primarily to pump water. However steam power would see the decline of wind energy as more European countries became industrialized.

Windmills played a part in the Second World War, particularly in the Netherlands, as shelter for refugees as well as look-out posts for the
Wermacht. Some Resistance groups used the sails to send signals to warn the locals of impending Nazi raids and some were used by the
Allied forces as radio outposts. Unfortunately the fighting left of lot of windmills destroyed and many have since fallen into disrepair.

This multi-level kit can be used for snipers/spotters or groups of soldiers to garrison when used in your WW2 battles. The sails spin on a
magnet and the roof cap can be spun around the building.